Cape Town has become one of the top holiday destinations in the world in recent years. Should you decide to visit the Mother City of South Africa, you will find many tourist attractions close to the City of Cape Town: Mountain ranges, beautiful beaches and a magnificent wine region are just a few highlights that Cape Town has to offer. The combination of all of these attractions is the reason this city is the preferred travel destination for millions of tourists throughout the world. If you haevn't booked your flight yet, you can search and compare flights of major airlines and travel agents with cheapflights.co.uk. 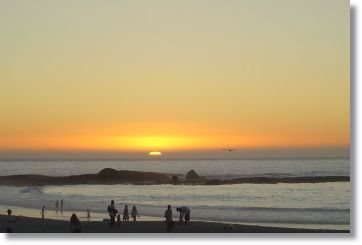 Camps Bay is an ideal place to spend your holiday while in Cape Town. Here you can relax at the beach with a beautiful promenade with many high palm trees and majestic mountains in the background. Due to its beauty, this coastal town has become one of the most popular travel destinations near Cape Town in recent years.
Bars, Camps Bay restaurants, cafes and hotels are situated near the beach in Camps Bay and are frequented by locals and tourists throughout the year. People from all over the world come here to enjoy the view as the sun sets over the ocean and the many other attractions that Camps Bay has to offer. Sports such as football, beach volleyball, tennis, bowling and cricket can be played close to the beach in designated areas.
The Kirstenbosch Botanical Garden – the Botanical Garden is located on the opposite side of Table Mountain. Here you can explore the many different floras that Cape Town has to offer. The park stretches over a vast area and offers magnificent service. There are also several restaurants present to make your trip to the Kirstenbosch Botanical Garden even more enjoyable. Furthermore, services for disabled persons are present.
Constantia – Constantia is regarded as the greenest spot in Cape Town. It is situated to the south of Cape Town on the opposite side of Table Mountain. Here you will find a very diverse variety of flora and fauna which are unique to this area of Cape Town. It is also here, that the best known and oldest wine estate is situated. In 1652, Jan van Riebeek planted the first vines which have now become a major industry of the Cape Town region. At the food of Table Mountain you will be able to experience one of the most famous and most beautiful wine routes that Cape Town has to offer.
Llandudno - rugged cliffs, rolling hills and the Twelve Apostles in the background of Llandudno complete the overall picture. The town of Llandudno radiates harmony and beauty – especially if you consider the landscape. 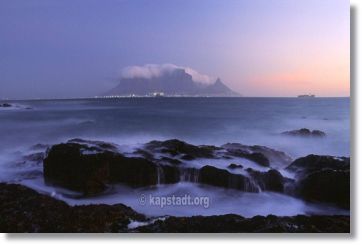 Table Mountain - The present appearance of Table Mountain is the result of water and wind erosion over many centuries. Through cracks and fissures in the sandstone of Table Mountain, water  was able to penetrate and erode the rock. This resulted in some of the biggest sandstone caves in the world. Table Mountain is in close proximity to the Lion's Head, Signal Hill, Devil's Peak and the mountains of the Twelve Apostles, which run from Cape Town via Camps Bay to Hout Bay.
Table Mountain is surrounded by Cape Town and its suburbs, and thus the center of the city. Due to its 1,500 different and sometimes unique flora, Table Moutain was declared as a national and historic monument in 1951. It is also known that more unique plants grow on Table Mountain than in the enitre United Kingdom.
Cape of Good Hope - The trip to the Cape of Good Hpe is a must when visiting Cape Town. It is regarded as one of the main attractions when visiting Cape Town. But the southernmost point of Africa is about 150 km further along the coast line, located at Cape Agulhas. It is here that the Atlantic and Indian Ocean meet.
Victoria & Alfred Waterfront - The V & A Waterfront is the most visited tourist attraction in Cape Town. Since 1991 it has been the hotspot for many tourists. In the individual shopping centers you can buy souvenirs to bring back home and then relax in one of the many Waterfront Cape Town Restaurants and cafes that are available. You can also go into the harbour and watch as ships sail away or come into the harbour. You will also be able to witness as ships are repaired, repainted or restored.
The fishing village of Hout Bay -The picturesque suburb islocated north of CampsBay/Llandudno and has a unique, picturesque setting. It reachable by one of the most beautiful coastal roads in the world. Whether you drive it during the day or at sunset– it will be a memorable experience! On the outskirts of Hout Bay you will finda small forests which was once part of a huge forest area. Jan van Riebeeck used this densely wooded area for shipbuilding. The farms Kronendal and Ruyteplaas were established in 1681 in Hout Bay.
Robben Island is situated 12km off the coast of Cape Town. At the time of theDutch regime, the island was mainly used as a prison. During the 2nd World War (1939-1945), the island was also used as a training station and defense base. In 1961, it was converted again into a security prison. African and Muslim leaders, Dutch and British soldiers, civilians and even women were onthe island. South Africa's first democratic President, Nelson Mandela and the founder of the African Congress, Robert Sobukwe, were among the most famous political prisoners who spent their sentence on Robben Island during the apartheid era. The last political prisoner was released in 1991.

The Wine Region of Cape Town - The Wine Region is one of the most beautiful regions, the Cape has to offer. A 20 minute drive from Cape Town takes you into the heart of this beautiful region: a naturally beautiful world, with majestic mountains in the background. The large wine plantations and Cape Dutch houses from ancient history are worth seeing. Enjoy the hospitality and beauty of Durbanville / Bellville, Stellenbosch, Paarl, Franshhoek, Somerset West, Robertson, Tulbagh, Constantia and the Overberg area.
Golf - Due to the excellent climate and very big British influence, golf has become a very popular sport and passtime in South Africa. There have been over 450 golf courses established in South Africa. South Africa is not without justification, known as a golf paradise in the world. The golf courses are spread over the whole country and every major city has a world-class golf course. Most coastal cities are home to some of the most beautiful golf courses of South Africa.
There are several golf courses, where you might also come into contact with wildlife in South Africa. It can happen that deers and other wild animals will cross the golf course at times. About 100 golf courses in South Africa are among the most scenic in the world and 12 of them belong in the top tier of all golf courses in the world.